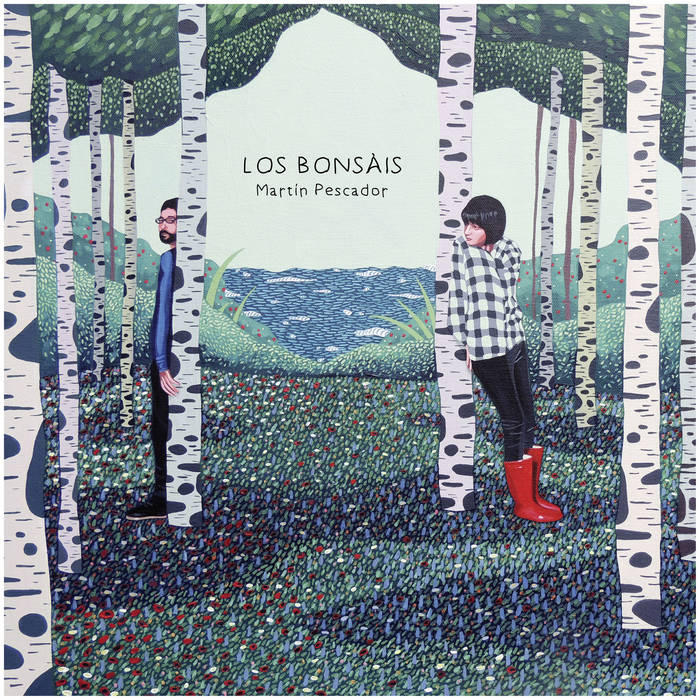 After the debut single for our collection “New Adventures In Pop” that caused quite a stir, LOS BONSÁIS are back with a Mini-LP that will be released in digital format and white 10” vinyl. It shows this respected duo from Asturias letting loose their passion for fast rhythm, noisy guitars and the sounds of bands like SHOP ASSISTANTS, THE VASELINES, MY BLOODY VALENTINE and THE PASTELS.

Hyperactive and self-sufficient, in addition to having prepared and recorded the eight songs on their new record and to their live performances over the past few months, Helena and Nel have also found time to make their own video-clips and release 4 editions of their fanzine “Temporal” (going back to the roots of the original fanzine format of photocopied paper). Helena also held her first art exhibition, displaying some of her work and demonstrating her exceptional talent as an artist, a talent that is clearly evident in the fascinating and captivating canvases she painted for the cover of the new record.

Once again, Iván and Eva from LINDA GUILALA have handled the recording and production in their Kaiju Studios in Vigo. “Martín Pescador” marks them out as one of the most interesting noise-punk-pop bands on the spanish scene. The record starts off with “Serín”, an explosion of noise that, in that distinctive and unusual way the band approaches their lyrics, tells of the scenery on a train journey between Oviedo and Gijón. Next is “Medio Tiempo”, the advance single of the Mini-LP which features a title that is quite confusing, as rather than referring to the tempo of the song, it refers to the minute and a half that the song lasts. An emphatic and powerful song that is pleasingly reminiscent of C-86.

“Martín Pescador” is one of the songs that highlight the purer pop side of LOS BONSÁIS, showing that they also handle themselves well at other speeds, a sort of mix between MARINE RESEARCH and THE CHARLOTTES, which tells a bittersweet and magical tale straight from Helena’s imagination. But the interlude is a short one. “Los Genios” is a cover of AVENTURAS DE KIRLIAN taken from an album of demos released by Elefant Records some years ago. Intended as an affectionate tribute but performed with total punk spirit.

The B side kicks off with “Problema” which features Nel on lead vocal, a song with hints of THE WEDDING PRESENT, THE PASTELS and TELEVISION PERSONALITIES, with crunchy guitars and fast beats, but with a great pop melody. Right after this comes “La Mecedora”, the first song composed by the Asturian band, unbridled punk-pop with crazy lyrics, a song to dance to with no inhibitions. “Himno Latino” is a jumble of noise and distortion full of irony and humour. And to wrap it all up is “Pigazu” (Which means “Siesta” in Asturias), a departure from the band’s regular style, slow and dreamy, approaching the atmospheric songs of bands like THE JESUS & MARY CHAIN, SHOP ASSISTANTS and TALULAH GOSH.

In summary, a sprightly, addictive and fun collection of songs that will delight fans of punk-pop and bands like GIRLS AT OUR BEST, BUBBLEGUM SPLASH, RAZORCUTS, REVOLVING PAINT DREAM, LUSH and THE PRIMITIVES.