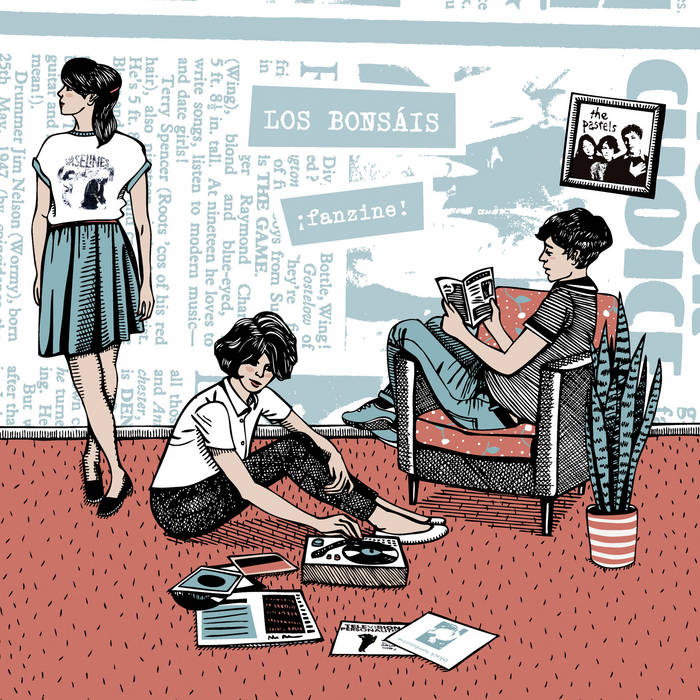 Every time we get our hands on a new LOS BONSÁIS release we realize how much we need their songs, like some kind of medicine that gets rid of the routine and the day-to-day, and fills you with joy, freshness, and the desire to live. This time, we have a black, numbered-limited-edition, 7” vinyl Single called “¡Fanzine!”. The title is a sneak peek into the contents of this new work by Nel and Helena. The Single is a tribute in and of itself and it teleports us through time to the golden years of the C-86. There are four covers, adapted to Spanish, all of which are proof of devotion and of a love of music that blend the surprise of the adopted forms with the love of the original song. It opens with nothing less than a “Punks A Tiempo Parcial”, that is a cynical, rough-house translation, as if it could be any other way, of the TV PERSONALITIES’ song, “Part-Time Punks”. The song makes the most of the original’s speedy boost and multiplies its pop spirit with a beyond catchy chorus. The vinyl’s side-A roommate is “Hijo Del Señor”, an appropriation, modified even in name, of THE VASELINES’ “Son Of A Gun”. If the original song combined its innocent and delicious melody with speed and bursts of noise, here we have that powerful riff that showcases one of the strong points of these Asturians: their ferocious guitars.

The B-side opens with a very shoegaze version of BLACK TAMBOURINE’s “Throw Aggi Off The Bridge”, or, in this case, “El Puente De Aggi”. It’s quite loyal to the original (though with some touch-ups in the lyrics), but it adds layers of noise, strength, and echoes that range between BEAT HAPPENING and PAVEMENT, but always with that predominant pop spirit. And to wrap things up, we have a mid-tempo - “Nada Que Hacer”, which was originally “Nothing To Be Done” by THE PASTELS. The song confirms an excellent selection of songs, which will undoubtedly make all of the band’s followers melt with pleasure. And with this LOS BONSÁIS confirm themselves as loyal disciples of sonic parameters, which they handle with ease, efficiency, and mastery.

As the icing on the cake, and so that everything makes sense, Helena gives us another delicious cover, and of course it all comes with a Mini-Fanzine with lyrics.